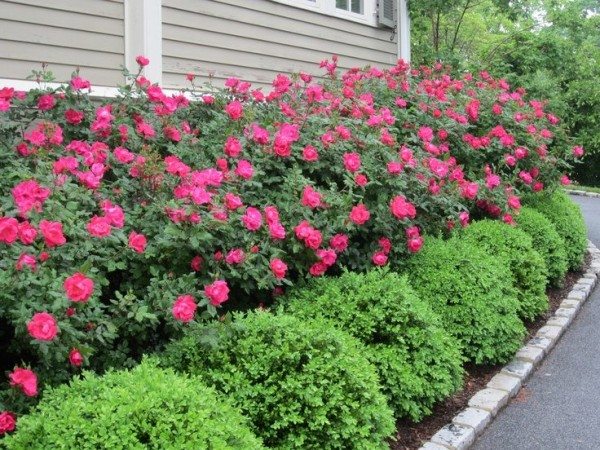 Posted at 16:42h in BLOG by Stephanie Trimmer 0 Comments
What’s so great about Knockout roses, anyway? The answer: There are too many reasons to count! They’re very dramatic, blooming from spring until frost in most cases. They suffer fewer insect and fungal issues than the old fashioned hybrids; they’re drought tolerant, versatile and easily pruned. There are so many excellent attributes that it’s almost hard to cite anything bad about them. Due to all their positive features they have become one of the most popular landscape plants in the nation. This will ultimately cause their demise. As with any monoculture situation, should a scourge appear, the damage done is many times greater than in a situation where diversity is the rule. In the case of Knockout roses, the affecting disease is Rose Rosette disease (RRD). RRD has been spreading through the United States for the past decade or so. Spread by miniscule mites that are borne on the wind, RRD is a virus that kills infected plants within a couple of years and there is no cure. It is said that hybridizing an RRD resistant variety could take another ten years. If planting a susceptible plant is not of interest to you, we’ve got some alternatives that you may really like. Knockout roses are a great plant but until there is some progress made toward inoculating them against their specific plague, you may consider one of the above alternatives for your new installs. Happy planting to you!
Share
Print page

Sorry, the comment form is closed at this time.